In the immediate aftermath of the earthquake, NRNA mobilised its network across the world at ground zero with around 300 plus volunteers from around the world and collected funds for immediate relief to the earthquake victims. It distributed food, temporary shelter, blankets, and clothing in crisis-hit areas and set up 26 medical camps. Working around the clock, NRNA reached and helped more than 17,000 families in 13 districts in coordination with the District Administration Office.

After finishing with relief efforts, the NRNA is also contributing to the rebuilding efforts through a private-sector and community-led effort. As part of this, it pledged to build rebuild 1000 permanent homes for earthquake victims.

The housing sector accounts for more than 66% percent of the losses occurred after the twin earthquakes. The Government of Nepal estimates more than 500,000 private homes will have to rebuild according to disaster-resistant building codes while also respecting local traditions.

Building back 1,000 homes aligns perfectly to NRNA’s slogan of ‘NRNA – True Partner to Rebuild Nepal’. After the project is accomplished, the NRNA also hopes it will serve as an example – for prospective planners, donors, or builders – that can be adapted to a larger scale.

A memorandum of understanding was signed between National Reconstruction Authority, Ministry for Urban Development and NRNA to build a model integrated settlement after relocating Laprak in northern Gorkha district to a new place on April 2016. As per the government records, 573 households were affected by the earthquake in Laprak. A new settlement will be built in 18.32 hector of land in Gumshi Pakha Danda. These shelters will be permanent in nature and more resilient in the event of an earthquake and provide livelihood and sustainability via tourism and other income generating activities.

Selection of sites (districts) and families as approved by the National Reconstruction Authority, Ministry for Urban Development were based on

Most needed and vulnerable families

Appropriate and feasible particular priority will be given in cluster areas

Districts willing to provide resources such as technical and other goods to construct the houses. 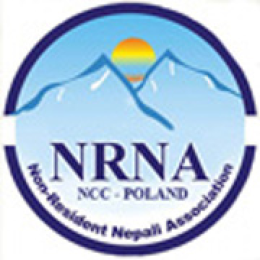